How I learned to stop worrying and love inflation

***Caution: this may be the most contentious blog I’ve ever written!*** 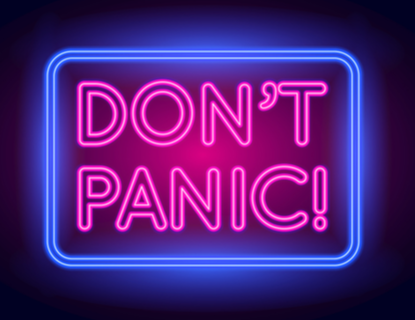 Inflation hits 30 year high… and you should do absolutely NOTHING!

No, your eyes are not deceiving you.  You DID read that correctly – despite inflation hitting a 30-year high, you should do absolutely NOTHING about it.  You shouldn’t adjust your cashflow models and, above all else, you should resist the urge to make knee-jerk changes to inflation rates.

Confused?  Good!  Read on to find out more…

Over the past few days, I’ve seen some worrying posts on social media about the way planners are reacting to the recent uptick in inflation rates.  We’ve all seen the headlines – “inflation reaches 30-year high”…; inflation could hit 8.2%… the question is: how do we incorporate this into our cashflow models and how do we reassure clients that the future we’re showing them is realistic, sustainable, and achievable?

We’ve had a number of phone calls and emails over the past couple of weeks from concerned planners. Are they concerned because they think inflation is trending upwards? Of course not. What’s happening is that their clients are seeing the headlines above and challenging the inflation assumptions their planners use in cashflow models.  While the adviser knows they’re right, perhaps they’re struggling to justify to clients that it’s appropriate still to use e.g. an inflation figure of 3% when inflation is sitting at nearly 3 times that mark!

It’s important to remember that cashflow models are long-term illustrations of one potential financial future.  The assumptions we make in our models should reflect this.  I’m not going to address what inflation rates you should be using in this blog, it’s something we’ve covered previously.  What I will do is talk about the justification behind the assumptions you choose (whatever those might be).

One thing that’s very common, both amongst our customers and firms who use cashflow modelling in general, is to take a look at long-term inflation trends.  After all, if you’re projecting 20, 30, even 40+ years of a client’s future, surely it’s sensible to look at what inflation has been doing over a similar period?

For the purpose of this blog, I’ve chosen to use the Retail Price Index (RPI).  This is purely because I’m a sensationalist at heart and headlines of “inflation hit 8.2%” are talking about RPI (currently 8.2%) not CPI (currently 6.2%). 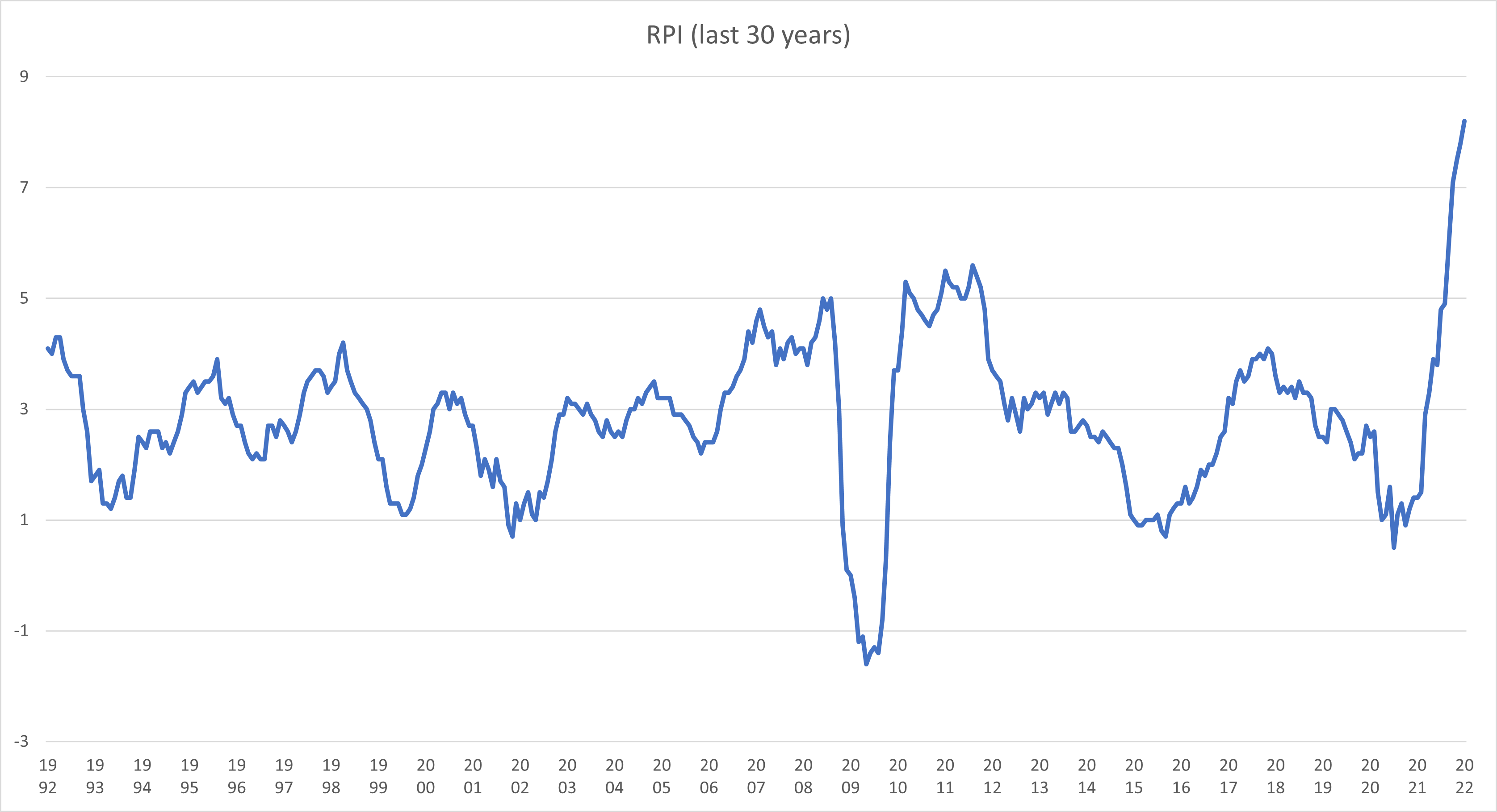 As you can see – it’s been a pretty volatile 30 years.  RPI has been as low as -1.6 and (of course) as high as 8.2% (February 2022).  But the thing about long-term trends is that they change slowly, a bit like a freight ship turning around.  Here’s what the rolling- 30-year average of the RPI looks like, over the same period: 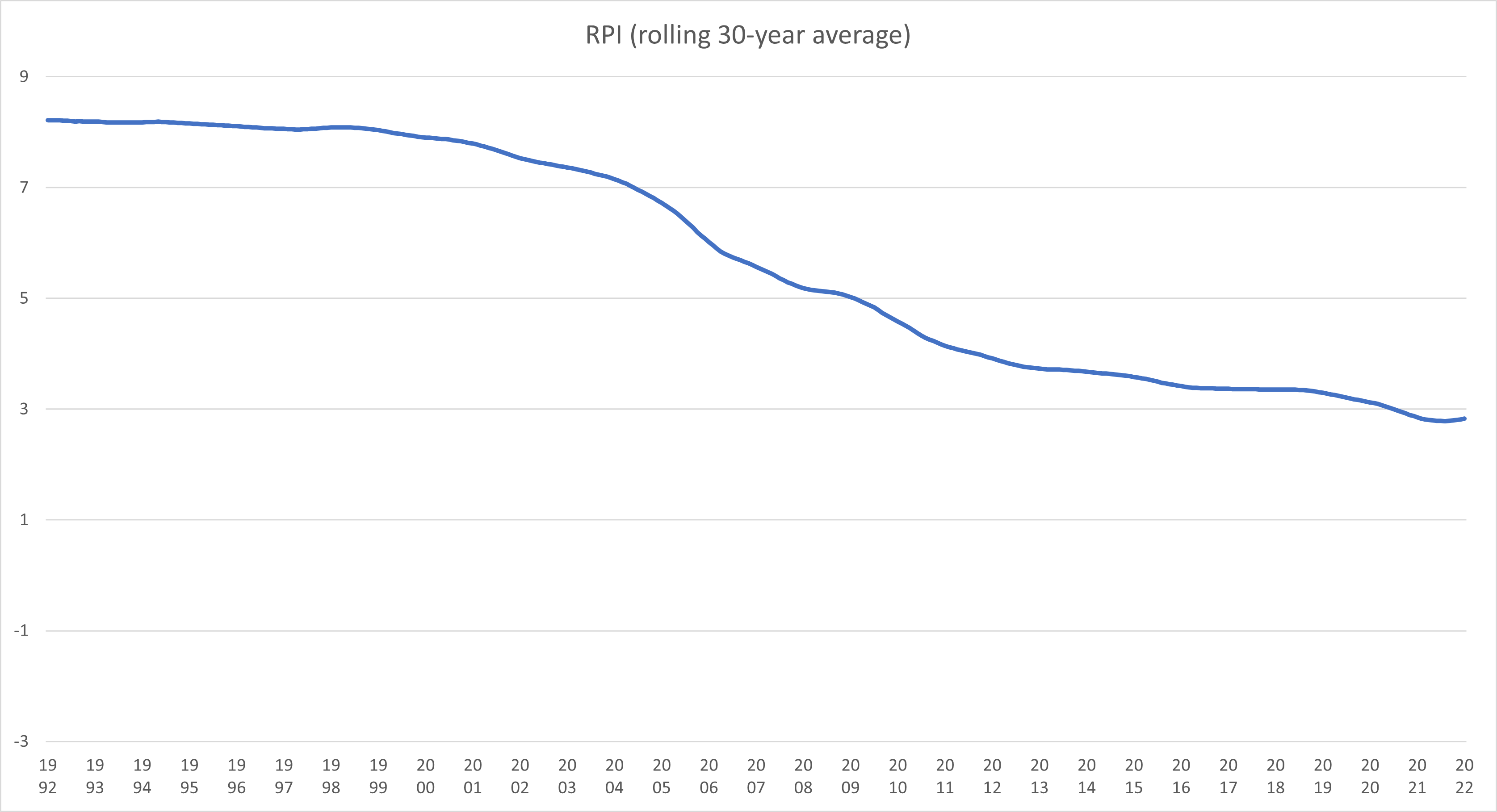 You can see the little tiny uptick at the end as the long-term average is trending back towards 3%.

It occurred to me that it might be interesting to see just how long current inflation rates would need to be maintained to have ANY impact on the long-term averages… so this is exactly what I’ve done!

So, what’s going to happen in the next couple of years and how will/should that impact what we do with clients’ cashflow models?

The Office for Budget Responsibility (OBR) forecast that CPI will peak at 8.7% in the final quarter of 2022.  If RPI continues to trend a couple of percent above CPI, this could mean RPI rates of nearly 11%!

BUT (and it’s a big “but”) both OBR and the Office for National Statistics (ONS) agree that inflation will return to the MPC’s target of 2% within the next 12 months.

The ONS predicts that standards of living in the UK will take their biggest hit since 1956.  But remember this isn’t due to a long-term trend, it’s due to a short-term shock.

What we’re experiencing at the moment is a large disparity between earnings indexation and inflation.  Would it be sensible to assume a long-term inflation rate of 8.7%, purely because that’s where inflation is predicted to peak?  Would it be sensible to assume your client’s earnings will only grow at 0.5% per annum for the next 15 years, because that’s the pay rise they received this year?

I’m not saying that inflation hasn’t risen, or that you shouldn’t be prepared to illustrate the impact of the change in standards of living.  By all means SHOW clients the impact of “what if inflation were higher”, but that doesn’t mean this should form the basis of your advice.

I’d recommend showing clients the potential impact of a long-term shift in inflation rates as a hypothetical: “Here’s a scenario where inflation is 3.5% or 4%, rather than 3%, and how it might impact your standard of living”. 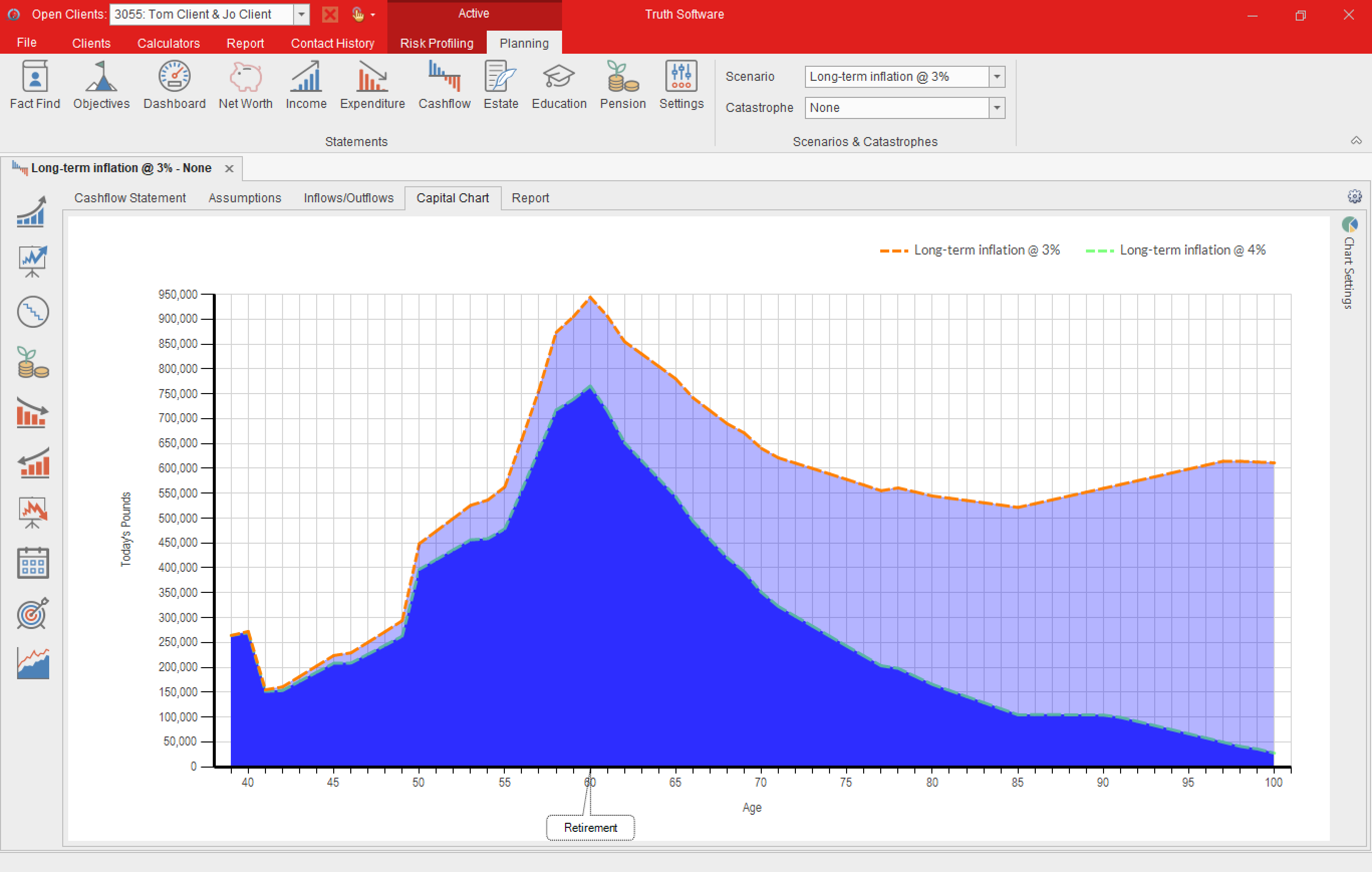 I don’t think it’s reasonable JUST YET to make long-term changes based on what is ultimately a very short-term trend.

OK, I’m not panicking… YET!

How long should we wait, before we start panicking?

Well, that depends in many ways on how much you trust the government!  What I’ve done in this blog is to play out a couple of different scenarios: one where inflation stays at the current level of 8.2% forever and another where it increases to 10% and stays there.  How long do you think it will take before we see an impact on that 2.827% figure? 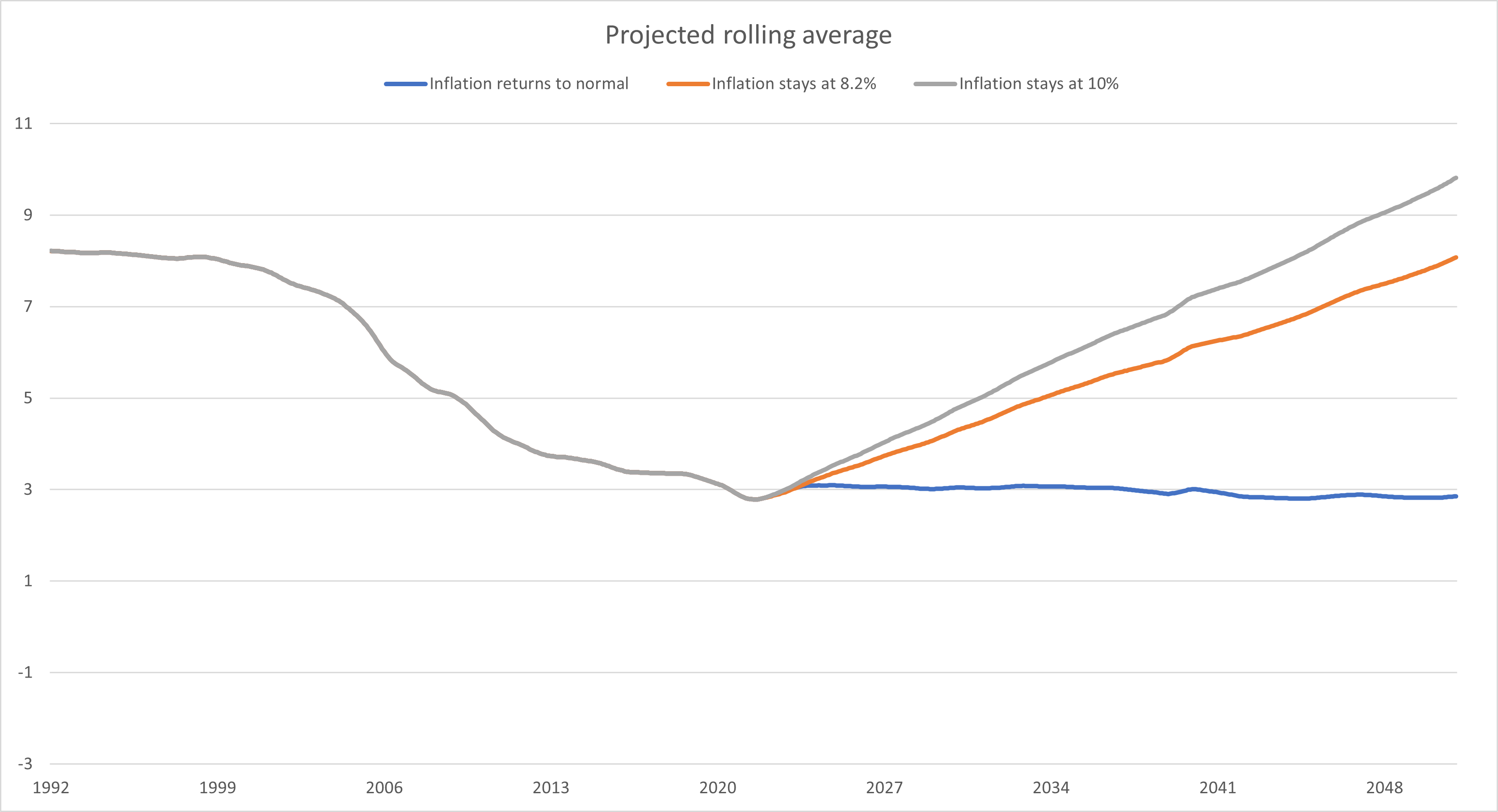 If inflation were to stay at the current level of 8.2% and stay there, it would take:

If inflation were to increase to 10% and stay there, it would take:

Well, that’s all very interesting, I’m sure you’ll agree.  But, so what?

The first thing that you should bear in mind is that, whether or not you trust the government, the likelihood that inflation will genuinely remain at 8%+ for the long term is minimal (that isn’t to say it will necessarily fall rapidly over the coming months).

The second thing to think about is just how large the numbers above are.  I’ve heard (and seen) examples of advisers using 8% inflation figures in cashflow models.  But the data above shows that we’d need current levels of inflation to persist for nearly 30 years (28 years 8 months, to be precise) before the long-term average for inflation gets over 8%.

Bearing in mind just how detrimental a force long-term inflation can be on a client’s cashflow, showing them the impact of their cost-of-living compounding at 8% per annum while their investments grow at e.g. 5% for 40 years (-3% real return!) will almost certainly paint a highly-pessimistic picture of their financial futures.

Do nothing (for now)

So, I’ll return to my opening gambit: inflation has hit a 30-year high… and you should do absolutely NOTHING about it!

What do you do when a client calls worried about the latest headlines on financial markets? You tell them to hold tight and explain the long-term vision. Why should inflation be any different?

That said, we do need to keep a close eye on things.  If inflation creeps even higher, there’s a very real chance that by next year your 3% inflation assumption could be a little on the low side.  If things stay that way for… about another 6 years, then maybe it would be prudent to increase your inflation assumption.  But only by 1%, not 5%!

In short: please don’t adjust your cashflow models to use an inflation rate of 8%.  At least, not yet.

This article is my opinion, based on mathematical projections of average inflation rates without any consideration of the macroeconomic and socioeconomic factors at play.

It is intended to help advisers justify their modelling assumptions, when challenged by clients, and to make sensible long-term assumptions in an unprecedented time.  A long-term rolling average is not the only fair measure or justification for inflation assumptions in a long-term cashflow projection.  You can, of course, use whatever assumptions you like, providing you justify them to your clients. 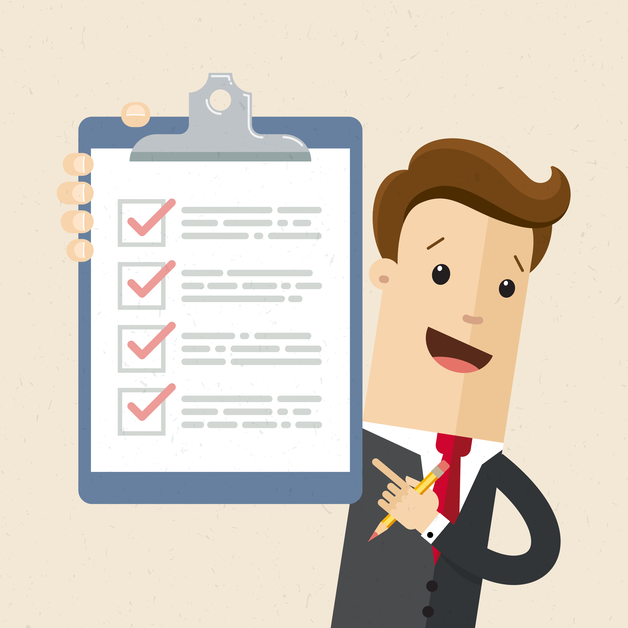