The Surplus Account is a fantastically useful tool.  Used correctly, it can save hours of time wasted matching income against expenditure for hypothetical shortfalls which might never happen.

Why is it important?

In Truth®, no expenditure is deemed to be “discretionary” in the sense that it might not happen.  If clients want to go on a world cruise every year in retirement, despite having no savings and meagre pension income, their cashflow will show them running out of money.  The tools in the system then help illustrate the many possible solutions to “fix” their cashflow and facilitate their desired lifestyles.

This notional account is a powerful tool when dealing with far-future hypothetical shortfalls or surpluses.  It isn’t intended to account for significant investments or withdrawals.

Used as intended, the Surplus Account saves wasting time on accounting for small discrepancies between inflows and outflows which might never happen.  The growth rate applied to surpluses and deficits replicates the impact of withdrawing from savings.  Left unchecked, however, large surpluses or deficits can have a significant impact on client cashflows.

Cashflow modelling is not a crystal ball.  No matter how much time, effort, and detail you put into your models, they will definitely be wrong.  That doesn’t, however, mean they can’t be useful, providing we get “now” right.

Paul Etheridge, founder of the Institute of Financial Planning (now part of the CISI) used to walk his clients through the information gathered during the fact-finding process to impress on them the importance of starting out right.  He’d take them through their assets; the client would nod to confirm they agreed with the assumptions.  They would take a look at income; again, the client nods.  They then look at all the client’s expenditure – the lifestyle spending, housekeeping, school fees, and mortgage payments.  The client nods once again: they confirm all the information they’ve provided is accurate.

Inevitably, clients would interrupt before the end of this sentence.  They didn’t have £30,000 available to invest which usually meant they’d understated their expenditure.  Paul would input additional “unaccounted for spending” for the difference.

This process helps focus the client on the importance of getting to grips with their spending.  Just because the model is guaranteed to be wrong is no reason to make it MORE wrong by starting out with inaccuracies from the start.  If the client is actually spending that surplus we see in year one of our cashflow, find out where it’s going and build this into the model.  If they’re spending it in year one, they’ll almost certainly still be spending it in year twenty.  If they’re topping up their ISAs, show the money going into their ISAs from the outset – that way, you can guarantee the returns they’re getting will mirror reality.

By starting out with as little surplus or deficit as possible at the outset (getting “now” right), the Surplus Account only comes into play when things change in future.

Here are some helpful tips from experienced Truth users.  Find out how they deal with surpluses and deficits, and what rates of return they assume:

When is it right to have a surplus?

As I mentioned above, the purpose of the surplus account is to allow for future hypothetical shortfalls or excesses.

The clients who earlier understated their spending by £30,000 a year have now given us an accurate picture of where their money is going.  They are in their 50’s and intend to carry on spending to the same tune from their planned retirement age of 60.  Unfortunately, much of their retirement income will come from a DB scheme that won’t pay out until age 65 and their State Pensions, which will follow a few years later.  As a result, they might have a small deficit in early retirement: 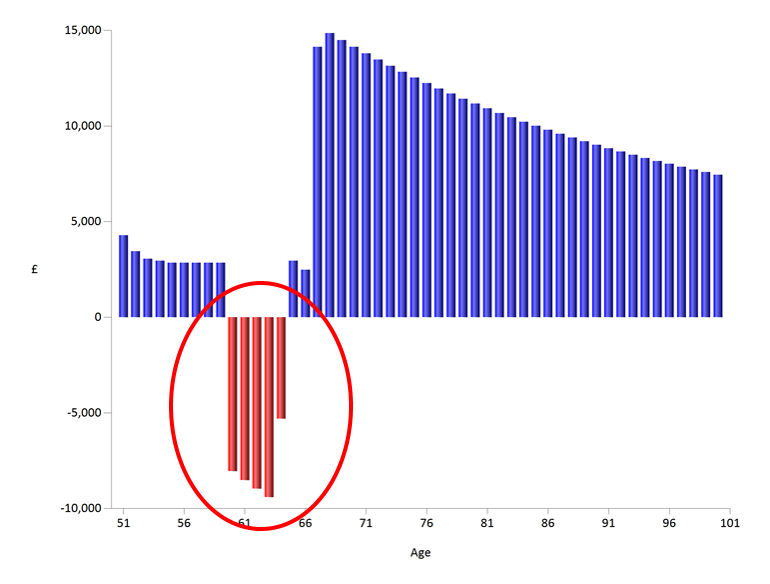 Of course, we could simply increase their pension income from 60-65 to cover this shortfall.  However, as soon as we modify any of the other assumptions in the model, the withdrawal required will change.  We might need to draw more or less income; we might need to change the withdrawal period.  The beauty of the Surplus Account is it simply offsets this shortfall against their capital.  Providing the client has sufficient capital by age 60 to cover this shortfall, they will simply see a blip on their cashflow: 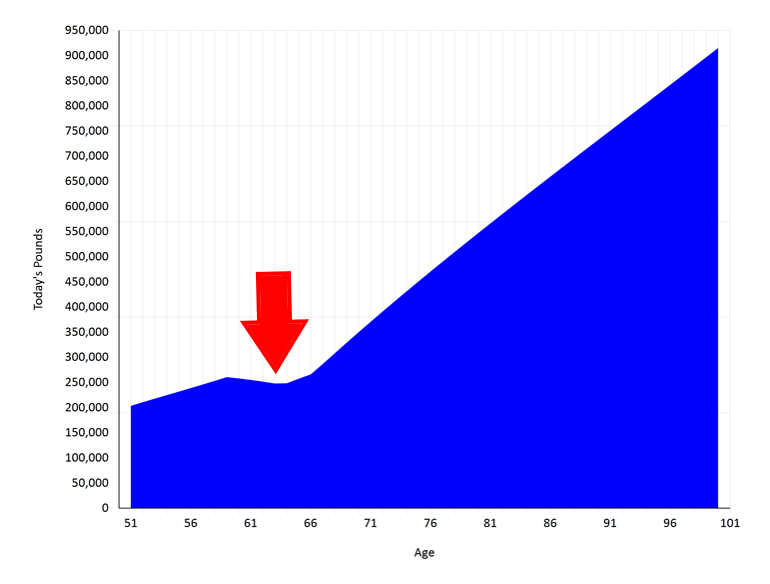 For the uninitiated: this is a Cashflow Capital chart in Truth.  It shows the client’s liquid capital balance now, and for the rest of their lives.  When it’s trending upwards, their capital position is improving; when it’s trending downwards, this indicates their capital is being eroded.  If the cashflow is all blue, the client never has a liquidity problem; if it dips into the red at any stage, this indicates they’ve run out of liquid capital.

Providing you’ve assumed a sensible rate of return on the Surplus Account, you’re saved the chore of chasing pennies that will never exist.  Of course, this further emphasises the importance of annual reviews – do you or your clients really want to plan to withdraw shortfalls from their ISA in 18 years time?  Or should we rather deal with it closer to the time, if it looks like becoming a reality?  Things will change before then, but the lifelong capital chart shows us the bigger picture.

This is a great example of where the Surplus Account can be a great planning tool.

…and when is it wrong?

Example 1: a client is planning on downsizing their home.  If we don’t specify where it should go, the equity released by the sale will fall into the surplus account.

If the plan were to invest this surplus at 5% (check out our Investment Return blog for more guidance, here) you could simply change the return on surplus to 5%.  While this would show the equity growing at 5%, it would also show those small hypothetical year-on-year surpluses growing at 5% (we’ll talk about growth rates shortly).  It could also result in the client having a large positive surplus.

Where clients anticipate significant inflows our outflows in future, it’s always advisable to specify how shortfalls will be met and where surpluses will be invested.  In the above example, it would be tidier to create a recommended investment portfolio for the client with a rate of return in line with the client’s attitude to risk.

This is even more relevant where clients have a significant planned expense. 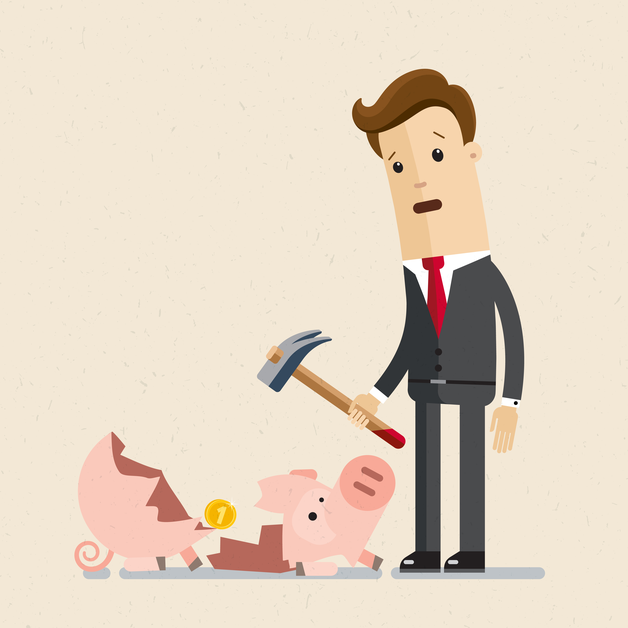 If we don’t specify the source for this client’s expenditure, they will immediately have a deficit of £250,000.  This is fine – it will simply be offset against their liquid capital.  It won’t necessarily skew their cashflow or your projection, providing the rate of interest you specify on shortfalls (we’ll come on to growth rates momentarily) is also 0%.

What this also creates is a potentially worrying liability on the client’s Net Worth.  They will still have £500k in the bank, but half of this will be offset by a £250k debt.  Again, it’s far tidier to withdraw £250k from the bank account to fund the mortgage redemption, providing these things are concrete, anticipated expenses.

Generally speaking, the growth rate on surplus should reflect where any leftover capital would be invested.  The interest charged on deficits should reflect the lost return on the investments that would need to be sold to fund any shortfall.

The Overdraft Rate is the rate of interest we will charge on any assumed deficit.  Remember, we won’t draw money from the client’s investments, the shortfall will simply offset their liquid capital.  Assuming any overspending would be met by a combination of withdrawals across cash and investments, the Overdraft Rate should reflect an average of the client’s liquid capital holdings.

A lower Net Return rate will result in a more conservative cashflow… BUT only if the client has significant surplus income.  This is because we’re assuming surplus capital is not invested, or grows slowly.

A higher overdraft rate will result in a more conservative cashflow… BUT only if the client has significant shortfalls.  This is because we are penalising over-spending more severely.

While it’s advisable to assume sensible rates on surpluses and deficits, these will only have a significant impact on your cashflows if you allow the Surplus Account to grow unchecked.  Providing significant inflows are invested and significant outflows are appropriately sourced, these figures should have minimal impact on your models.

Used correctly, the Surplus Account saves worrying about hypothetical future shortfalls which will quite possibly never happen.  Understanding the impact of its use (and abuse) will allow you to plan with confidence and rapidly vary assumptions and create scenarios live in client meetings.

The following are useful resources when deciding on and documenting your assumptions and the reasoning behind them: 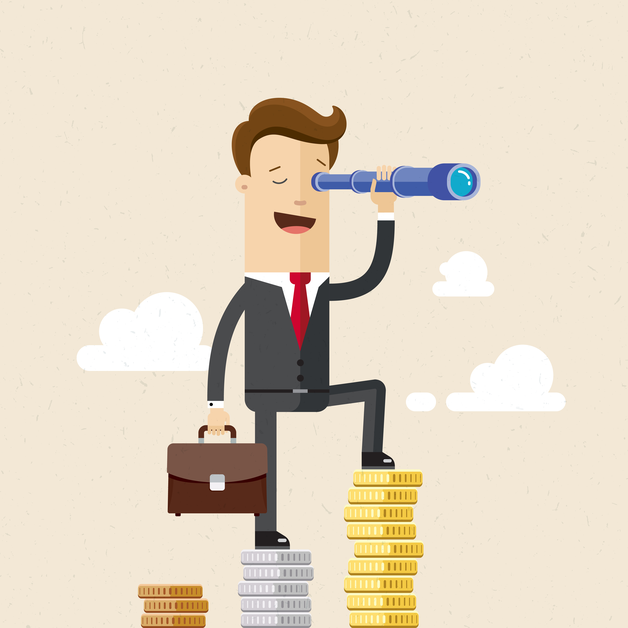